14-11-08
Chaing Mai in Northern Thailand is a bustling city full of tuk tuks and tour vans. After our dinner on arrival with a traditional Thai dance from some local ladies we head to the night market. There is nothing too impressive that I haven’t seen before and the five or six blocks and twisting alleyways show much of the same thing. I buy some shirts for the boys anyway and some small gifts and head back for another late night (midnight). As much as I am a night owl, I have nothing on these people.

15-11-08
I only have one full day here so I decide to go and take a tour called Flight of the Gibbons. This activity is the most fun you can have on a high wire. It is a 2km stretch of cables and air bridges and platforms approximately 100m off the valley floor in a rainforest. Each person has a full body harness and pully system attached to them and the small groups of nine are guided by two leaders – one at the front and one at the rear. The longest wire is 150m across and the whole system is as safe as something we would do ourselves (probably safer). The company was set up by a bunch of Aussies and Kiwis so go figure. I would recommend this activity to anyone. The trip in the rainforest takes approximately three hours so you get as much fresh air as you can handle. It is pricey at 2080 baht but worth every penny. Your lunch and transfers are included as is your safety gear and your trusty brake – a V-shaped piece of bamboo on a string – priceless! Lunch wasn’t too bad either. I liked it so much I bought the T-shirt

Tonight Kate and I are heading to Bangkok on a sleeper bus as all the trains are booked up until next Tuesday. Lucky enough we have our tour guide is on the case for us and she has helped us secure our tickets departing Chiang Mai for a mammoth ten hour haul down south. So in the meantime we have four hours to kill; I think I hear a foot spa and salon calling my name… 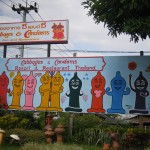 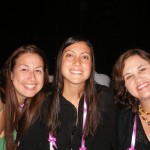 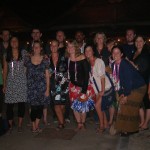 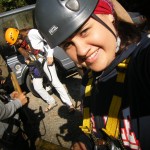 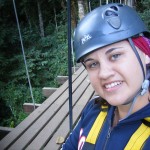 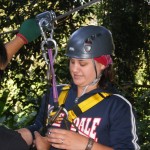 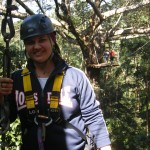 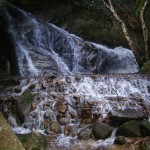